Through your support, you contribute towards enhancing awareness of Islamic issues and initiatives all over the world as well as the people supporting these issues and initiatives. In your commitment to do so, you inspire others to participate in the process of innovation and change.
More… 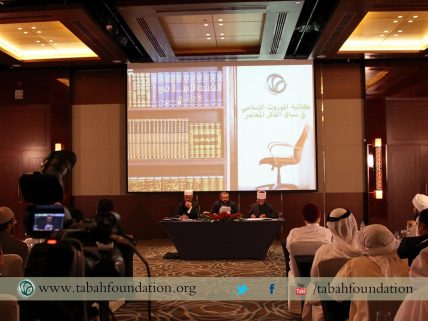 Tabah Foundation held a seminar entitled ‘The Rationality of Islamic Tradition within the Context of Contemporary Thought.’ The seminar took place during the semi-annual meeting of Tabah’s Senior Scholars Council. It shed light on a recently released research publication by Tabah on postmodern thinking by Dr. Karim Lahham, Senior Research Fellow at Tabah Foundation and Barrister-at-law of the Inner Temple, UK.

Featuring some of the most-renowned Islamic personalities, the participants were led by the former Grand Mufti of Egypt and member of Al-Azhar’s Council of Senior Scholars Dr. Ali Gomaa, Chief of the Board of Tabah Foundation Al-Habib Ali Al-Jifri, the Libyan Ambassador to UAE and chairman of Kalam Research and Media Dr. Aref Nayed, in addition to a number of professors from Zayed University and a distinguished group of academics and competent experts.

Al-Habib al-Jifri inaugurated the event by pointing out that the region is standing at a cultural juncture, the early introductions of which date back three or four hundred years ago. He asserted that during the current period we are witnessing fast-paced cultural transformation accompanied by a state of comatose blanketing attempts of renewal stemming from our scholarly tradition which are based on an accurate conception of changes in human reality. He added that the current Islamic discourse faces a problem with regard to the possibility of the continuation of its connectedness with its uninterrupted chain of transmission (whether in relation to narration, comprehension, or moral purification); and with regard to the scholarly gradualism which the Muslim community had grown accustomed to being tied to an established methodology, along with an ability to confront present-day challenges.

The seminar was facilitated by Sheikh Usamah al-Azhari, director of the Office of The Message of al-Azhar. Dr. Karim Lahham—the author of the research work in discussion—delivered a paper addressing the consequences of the concepts upon which modernists base their understanding of Islam. He criticized modernists’ raucous voice in their calls for reform, along with epistemological and philosophical poorness in terms of founding real intellectual reform.

Dr. Lahham’s paper concentrated on the extent of such modernists’ comprehension of philosophical principals, along with their accuracy in applying them to the Islamic tradition. He admonished the modernists and postmodernists for incarceration in an “ideological cave” of assumptions. This condition spawned a host of barriers separating Muslims from their own legacy—a legacy that is replete with discerning research methodologies. The gravity of this condition stems from its reduction of faith to religious rituals, and to the political domain through the imposition of epistemological barriers between man and religion. Dr. Lahham warned against the danger of the grave attempts by modernists resulting in the absence of a multitude of re-categorizing sciences, along with their modus operandi in terms of structuring concepts and philosophies based upon scientific rules. At the end of the paper, he called for a comprehensive reconsideration of the relational configuration between traditional sciences and for re-extracting the hidden gems lying latent in the Muslim intellect, including its catalog of sciences and disciplines.

Sheikh Saeed Fouda, a researcher in the discipline of kalam (scholastic theology), commented on Dr. Lahham’s lecture by commending the depth of its substance, objectives and outcomes, and its endeavor to deconstruct the intellectual, philosophical and epistemological foundations upon which the modernist intellectual school of thought depends. Sheikh Fouda also referred to features of contemporary philosophy that holistically addresses human beings—rather than human intellect—as a referential yardstick for understanding the world. This is a characteristic feature of postmodern thinking; a symptom that we have been suffering from particularly with respect to the postulation that the mind does not exist by itself, as argued by Nietzsche. The latter considered reason as one of the causes of humanity’s regress. Sheikh Fouda highlighted that postmodern thinking does not acknowledge the existence of a priori concepts and that its proponents describe reason, in their own words, as an idol that must be shattered.

Following Sheikh Fouda’s critique, the floor was opened for comments from the attendance. Dr. Ali Gomaa initiated the session by addressing the definitions of reason offered by Muslim in addition to the “four pillars of reason”: the Brain, sound senses, sensed reality and prior information. This quadrate explains the content and conditions and basis of taklif (moral and legal responsibility) in Islam. Dr. Gomaa confirmed the importance of the role of previous information, with its two sources being revelation and the world. For Muslim scholars, knowledge is taken from both books of revelation; the holy Quran, and the world. Through understanding both books of revelation Muslim scholars credited revelation as a source of knowledge. Muslims learn from both books knowing there is no contradiction between them. In case where a contradiction arises they know it is due to their understanding of the Qur’anic text not the sacred text itself. This is what drove Islamic scholars to divide the Qur’anic text—all of which is definitive in terms of its authenticity (qat‘i al-thubut)—into two categories: definitive in meaning (qat‘i al-dalalah), and speculative in meaning (dhanni al-dalalah). Revelation is therefore neither superior nor antithetical to reason, but rather it is one of its sources. The same applies to the universe: it is a source of reason and if a contradiction arises, the universe then takes precedence over speculative understanding of the scriptural text. Dr. Gomaa also dealt with the topic of the collective consciousness or mind (al-‘aql al-jam‘i), which is considered an essential and indispensible element in the structure of the intellect.

Dr. Aref Nayedh’s comment followed, shedding light on modernists’ incoherence, which he claimed to be no more than a new kind of sophistry and fallacy in their approach in interpretation of Quran. The so-called “Qur’anist school” _which considers Quran the only source of Tashree’_ subscribes to this approach. It is noticeable in this school’s literature—as well as in postmodern literature—that the scriptural text is analyzed through certain mechanisms such as metaphorical interpretation, semiotics, hermeneutics and structuralism. The interpretive approach of this school has slipped into error as a result of its examination of the relations between meanings without referring to the relevant circumstantial prerequisites, like the prerequisites of the historical condition (for example: on the issue of circumstances of revelation, or asbāb al-nuzul), prerequisites of the accumulative condition, or what is known as the collective mind. Extirpating Qur’anic text out of its historical context, from the Prophetic Sunnah which is its interpretative reference, and from the uninterrupted chains of narrations, has led them to falling into such fallacy during their attempt to interpret Qur’anic texts. In the concluding section of his comment, Dr. Nayedh stressed the dire need for the contribution of the discipline of kalam and to connecting this discipline with contemporary philosophies.

Dr. Ali El-Konaissi, Professor of Philosophy and Islamic Studies at Zayed University, followed by commenting that Muslim philosophers—led by al-Kindi—expanded in their engagement with theories of the mind. They interpreted, explained and extracted—not to mention corrected—all ideas on the mind derived from Greek philosophy after first translating Greek works into Arabic. He cited the example of the al-Kindi’s critique and amending Aristotle’s theory of hylomorphism in the work De Anima which was translated into Arabic under the title Fi maheyat al-‘aql (On the Essence of the Intellect). Aristotle asserts that the intellect is divided into two types: an active, and a passive type. In response, and based on his deep comprehension of the essence of religion, al-Kindi reclassified the intellect in a new way. He argued instead that there are four types of the intellect: (1) the primary (or First) intellect, which belongs to God; (2) the potential intellect, which is the human intellect and the tool of connection to primary intellect; (3) the acquired, and; (4) the demonstrative intellect.

The paper presented is part of the Tabah Papers series produced by Tabah Research. The objective of the paper is to probe the conceptual structures upon which the writings of postmodernist thinkers are founded. The work concludes that any thinker or writer is the heir of the gamut of concepts or conceptual orders which surface in his or her writings whether consciously or otherwise. Any given concept is neither an orphan nor has no origin. Thus, the validity of any concept largely relies on the origin of its genealogy. Consequently, the value of any idea is commensurate to the value of its origin. This is what the researcher has attempted to trace and evaluate in his work.

Part of the audience

*This website is optimized for use with desktop browsers
Release of new analytic paper: Reducing the Role of Decision-Making Biases in...