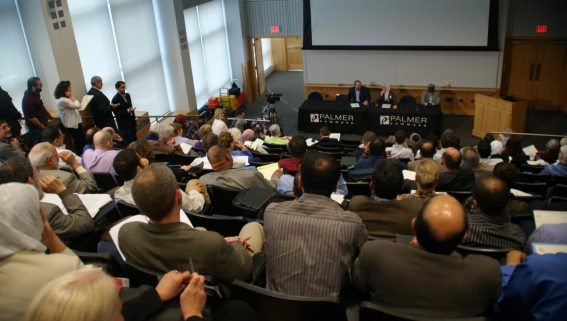 On April 10–11, 2011, Musa Furber (Research Associate), attended “Where Religion, Policy, and Bioethics Meet,” a conference on Islamic bioethics held at the University of Michigan. This conference was the first if its kind to be held in North America. Although Islamic bioethics has been a topic of interest to Muslim scholars since the 1970s, it has only recently become a topic of interest in Western and English literature. Islamic bioethics in the West is dominated by medical practitioners and social scientists who are not themselves versed in Islamic law and oftentimes antagonistic towards Islamic scholarship. This conference broke new ground by including a number of Muslim jurists amongst its speakers. The conference was attended by over 150 attendees, mostly from the medical community.

Among the conference’s topics were: the relationship of culture and society to bioethical values; the status of bioethics amongst Muslim physicians and in the Muslim world; bioethics within the healthcare system; and Islamic bioethics according to Islamic scholarship. Furber had the honor of being invited to present how traditional jurisconsults respond to bioethical dilemmas and the role of juridical councils. Furber had received many questions about bioethical issues when he was at Egypt’s Dar al-Ifta, so the invitation provided an opportunity for him to work with classical and contemporary jurisprudence – theoretical and applied. But more importantly: it was an excellent opportunity to demonstrate the Shari‘ah’s positive concern for the sanctity of life and human dignity.

Furber covered in his presentation the relationships between jurisprudence and medicine, the methodology jurists use when researching bioethical issues, the prerequisites for the individual carrying out Islamic legal research, the large number of contemporary bioethical issues that jurists have already addressed, the need for collaborative research for interdisciplinary issues such as bioethics, and the status of opinions issued by individual jurists and juridical councils. His presentation also touched on the need to seek legal rulings from qualified jurisprudence, and the shortcomings of generalizing the highly-contextualized fatawa found in newspapers and online. At the end of his presentation, he recommended that future discourse on Islamic bioethics in North America needs to include qualified jurisconsults.

Later during the conference, several Muslim physicians mentioned their surprise at learning about the range of bioethical issues that had already been covered by jurisconsults. Many attendees indicated their interest that jurisconsults and qualified Muslim scholars take an active role in future discussions. Several non-Muslim professors stressed the need for greater participation from representatives of normative Islamic scholarship as that is the Muslim voice that interests them.

In sha Allah, this is just the beginning of Tabah Foundation’s participation in Islamic bioethics, both abroad and locally. Many regional physicians have expressed their interest in learning about Islamic bioethics, for their own practice and to better serve the needs of their patients.

Musa Furber Cited in “The National”
Scroll to top