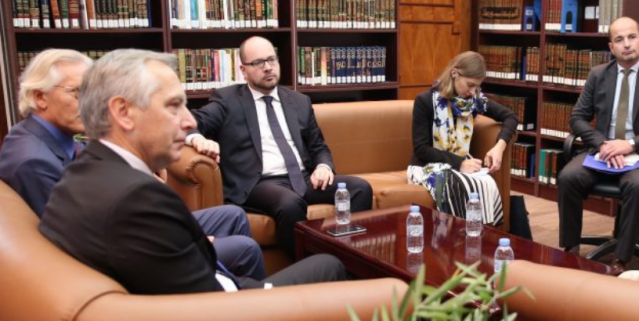 On Monday 19 December, Tabah Foundation hosted a special visit from the Delegation of the European Union to the UAE. The delegation was led by Ambassador Patrizio Fondi and Mr. Jan Figel, EU Special Envoy for the Promotion of Freedom of Religion or Belief Outside the EU, who was on a special visit to the UAE. They were received by Noureddin Harthi, CEO, and Abaas Yunas, Analyst at Tabah Futures Initiative.

Discussions were wide ranging and highlighted important issues related to religion and the contemporary world, including the role of faith and reason in the Islamic tradition, the depth and diversity of Sharia and it’s central importance to the religious practice of Muslims, the application of Sharia in non-Muslim majority countries and the dependence of a correct understanding of Sharia on sound scholarship as embodied in the mainstream Islamic scholastic tradition. Mr Yunas explained that since the world is a bastion of a plurality of ideas, value systems and worldviews, then true dialogue and tolerance can only emerge when there is universal acknowledgement of this plurality. Mr Figel stressed the importance of promoting the understanding of religion in all sectors of civil life and commended the work of Tabah Foundation in this regard.